We are finally in fabled Kyoto, the end of the great Tokkaido road from Edo, and the cultural capital of Japan. 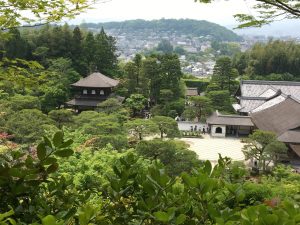 There is much to say and I will start off on a topic something less than elevated — garbage.  Kyoto is an amazingly clean city, no trash anywhere and an exemplar to many other nations, including the U.S. — especially when you consider that there are very very few public garbage pails.  I spent hours walking around with a plastic bag of trash and was unable to find someplace to dispose of it.  There are plenty of recycling stations collecting plastic and glass bottles but apparently everyone is expected to carry their trash home with them.  Our philosophy in the U.S. is we need more collection bins to reduce the rubbish — but here another perspective is operating.  Which appears true for many of the standard customs of our respective nations.

Bill, Trisha and I returned earlier from Koyasan than the others and Bill and I took the opportunity of free time to see several impressive sites:  the Kawai Kanshiro museum, which is the preserved traditional home of one of Japan’s greatest 20th century ceramists, the Kyoto National Museum of Art, housed in a large Meiji-era European style building, and the Sanjungendo, an amazing temple filled with a thousand almost identical many-armed Buddhas (no photos allowed). 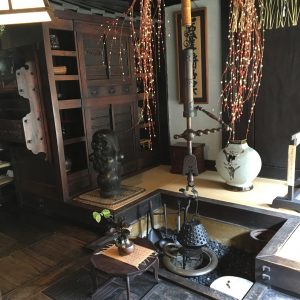 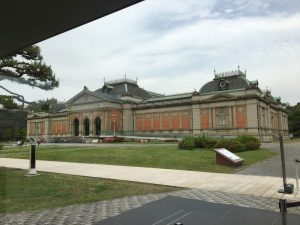 We walk around in a daze at the refined beauty of everything around us — although these remnants of the past are only found in small pockets of the city.  Small and large, attractive and ugly modern buildings abound and fill the spaces once occupied only by fine wood crafted homes of yore.  But it is amazing to walk in an urban neighborhood and suddenly find around the corner magnificent ancient temple buildings, seen through a finely carved entrance gate, or a red tori gate leading to a wooden shrine hemmed in by tall ugly concrete apartment buildings.

The Higashiyama area of Kyoto is filled with amazing temples in an area once in the foothills of the surrounding hills and now in a quiet suburban area.  We walked 7 miles around the area, from the Silver Temple, down along the Philosopher’s Walk to Honen-in and Nanzen-in.  Our first stop was a visit visit the incredible Konchi-in with beautiful ancient gardens and with few other people.

The Silver Temple, on the other hand, was overflowing with tourists, understandably as it is of outstanding interest, with its raked gravel and manicured trees.  We saw a gardener (work formerly done by monks) in the process of painstakingingly raking a ridge of gravel. 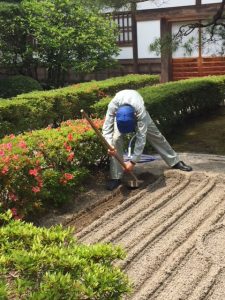 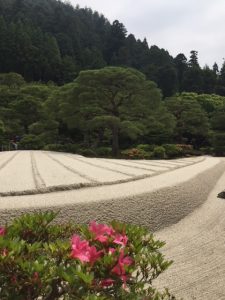 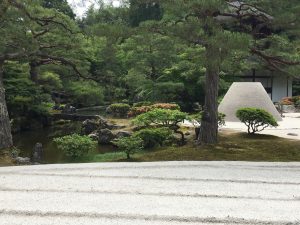 The Honen-In was quiet and serene with a beautiful ambience. 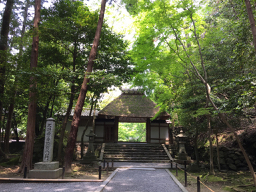 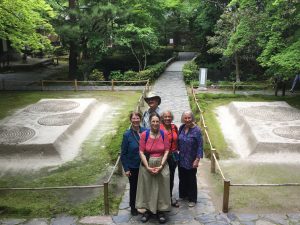 A word about the flowers during our visit:  although we have missed early spring and the cherry  blossom time, we are in a period of intense bright green foliage spiked with the blooming of azaleas of many colors.  People’s small outside gardens are aglow with new flowers as we walk down residential streets.  It is the time of young bamboo and bamboo shoots appear on many menus we have sampled and we saw them growing in one temple garden. 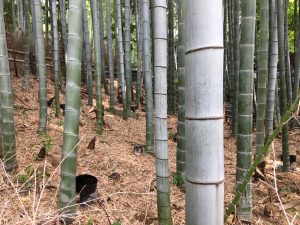 We are having a wonderful time although Trisha is struggling with a bad cough and not feeling well.