A city near the Sea of Japan, Kanazawa escaped the ravages of WWII due to its reputation for culture and arts unlike its neighboring city to the North, Toyama, an industrial complex that was 90% destroyed by U.S. bombs.   Our guide in Kanazawa who was raised in a suburb of Toyama told us how her grandmother retold stories about the dead bodies she saw after the attacks.  Although it is hard to imagine this nation of polite and gracious people engaged in the kind of brutality engaged in during WWII, it is easy to see how the preciseness in behavior, emphasis on punctuality, and history of an honored warrior class  could lead to a great military establishment. 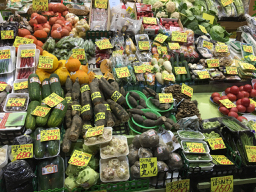 Our first afternoon in Kanazawa was brilliant as we went our different ways to begin our exploration of this city in golden sunlight.   Taking the bus, Bill and I visited a small and beautiful Noh Theatre Museum where we had a chance to be dressed like the traditional players. 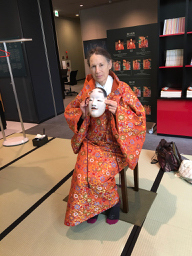 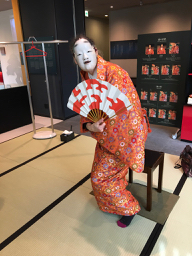 The 21st Century Museum of Contemporary Art was an interesting architectural statement with very few exhibits for the given space but it was crowded with weekend Japanese visitors, including children, enjoying the beautiful weather.  The D.T. Suzuki Museum is dedicated to the man who first brought well documented exposition of the Buddhist philosophies of Japan to the U.S. and is a beautifully simple design, in line with the philosophy he espoused, with a contemplative room surrounded on 3 sides by a peaceful water garden. 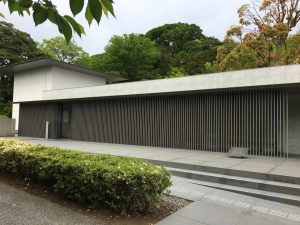 Our walk to the next bus stop took us through the Kerokuen gardens, one of the 2 top Japanese gardens in this country, which we were scheduled  to visit the next day, where the trees are so old that many of the legendary branches are upheld by large wooden supports.   As it looked like we missed our bus, Bill suggested we walk back.  And so we did, a one hour walk through the Kanazawa Castle grounds and past another beautiful garden and down through the City.   Meanwhile Pat, Ginny and Claudia visited the Museum of Traditional Arts and Crafts where artisans were learning and practicing traditional arts of the area. 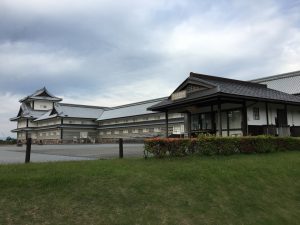 Our dinner entailed a lot of laughter as we ate at a sushi restaurant where the dishes were ordered on an iPad and then delivered to our booth by a miniature Shinkansen train which sped around on a track.

It is a good thing most of us had at least a brief walk through the Kerokuen Gardens as the next day it rained heavily all day and although we had a wonderful time visiting the Samurai District and the Geisha District with a friendly knowledgable guide, all under our umbrellas and raincoats, we did not get back to the gardens. 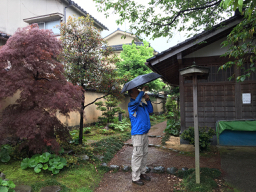 The beautiful old houses in both districts are being preserved, although the descendants of the great Samurai families are all gone, except for one elderly couple.  There are only 5 Geisha houses remaining in Kanazawa with from 5-10 trained Geishas in each one, woman trained to entertain with music, dance and great conversation.  We visited the Nomura Samurai House, with an exquisite garden, and one of the Geisha houses. 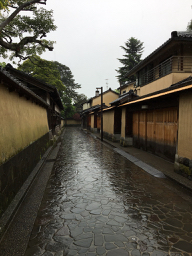 In the Samurai District 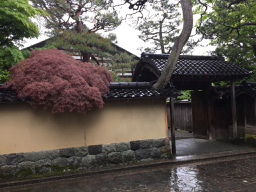 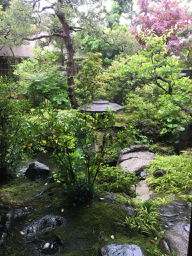 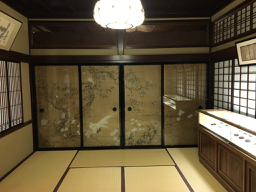 The highlight was sitting together by ourselves in a beautiful tatami room and talking openly to the guide about life today in Japan.  Her generation (a little younger than we are) is struggling to accept their children’s decisions to live on their own before marriage with their partners, to have couples marry who have already borne children together, and to undertake career choices that seem at odds with their parents’ traditions. A number of her children’s friends have met their mates through internet dating, which is hardly surprising in a culture which adapted text messaging and cell phone photos way before the U.S.

In the Geisha House

A little potty talk:  Although the modern toilet system was first created in England and then further developed in the U.S., it is the Japanese who have taken the concept of indoor plumbing and hygiene to its present day pinnacle.   The standard toilet in every public place and hotel is well heated, with a cleaning spray (of variable chosen strength), sometimes with a blow-dry function, and sometimes with a musical or “privacy” option to cover any body sounds you might make.  There is also in public rest room stalls a cleaning dispenser (often with directions) for sanitizing the toilet seat after use for the next person – which is quite a different philosophy then expecting the next user to clean up the mess left by others.  This conservative attitude toward the sounds of human elimination seems so incongruous to us in the U.S. who are puritanical about public nudity, whereas the Japanese have accepted nude group bathing as an absolutely natural state.  And the public toilet rooms are, with only one exception we found so far on our trip, shining clean.   We just left the Fukui train station rest room and the ceramic tiles on floor and walls looked were sparkling white.  There are free public rest rooms everywhere — a great boon for us more aged travelers.  Some photos next time around.

We leave our hotel to walk to the train station in a light show and hope the weather clears up for our active day ahead!