This morning our Black Monster steam locomotive cuts a narrow swath through an idyllic landscape.  We clatter along through rich agricultural land, rectangles and strips of land growing various produce, brown and shades of green.   The train stops and is breathing out black smoke.  There is a donkey by the side of the train as well as herds of cows and flocks of sheep.  The donkey watches as the engine struggles to find enough power to move uphill, with the engineers providing sand to provide traction on the rails as this day is moist with low hanging clouds.  I understand that quinoa, a staple and common plant in this part of the world, is also sometimes used for this purpose. 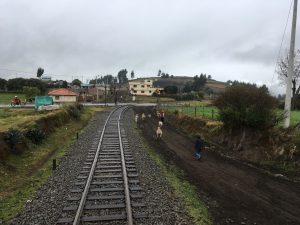 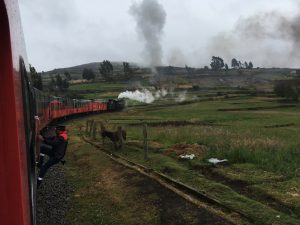 Out of my window, I see a young women hauling a pail filled with white milk from the cow in the field in front of me and nearby some beautiful horses stand at attention and flick their ears as we pass by.  It is a semi-rural landscape, very green with the foothills of the great string of volcanoes along Ecuador’s spine in the distance. 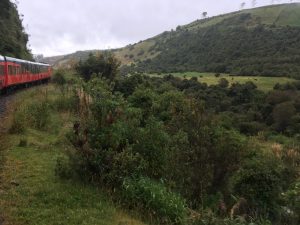 We arrive into a small city and the roofs here are sometimes of terra-cotta tile providing good insulation against the Andean cold, as well as the more standard flat-top brick and cement blocks.  I see also standing seam metal roofs as well as quonset hut type structures.  There seems no order in the construction or any sense of urban planning.  The sun is now shining through large clouds and although the volcanoes can not yet be seen, the green terraced fields rising up above the urban sprawl are becoming more and more visible. 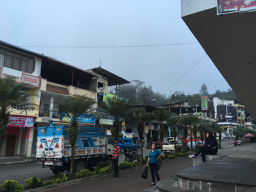 The stop at Ambato is to meet a national treasure — the last Andean Ice Maker who, at age 67, still goes twice a week up a mountain to bring down pieces of glacial ice for his town’s iced drinks.   Here, the train also gets one of its required rests to check the heat of the brakes and to oil some parts.  It is drizzling now, a light rain.  Below, Balthazar the ice maker and his brother who is no longer physically able to do the ice moving and instead makes fruit sorbet. 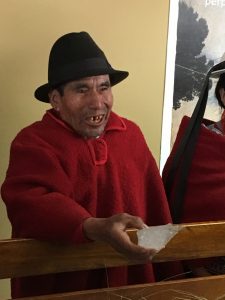 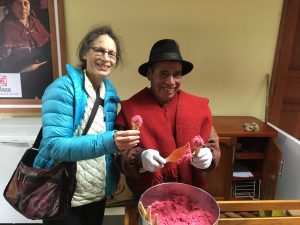 At our next stop, our train is invaded by Devils, red, black and green masked creatures who dance down the aisle of our train car, enticing some to drink from a bottle of spirits and encouraging others to get up and move to the rhythm.  Soon, our car is a mass of bodies moving to a broadcast beat.  There is an annual festival in a local town celebrating the Devil, and a large parade of masked people join in, which I understand is historically a celebration of the revolt against the Spanish and reaffirmation of the local cultural spaces.  The TV film crew is getting it all down. 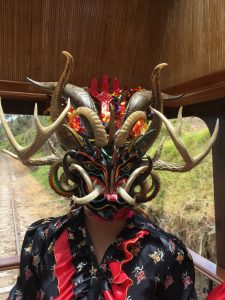 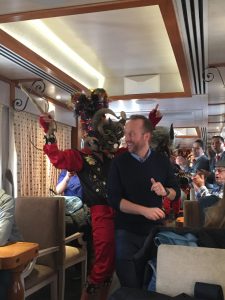 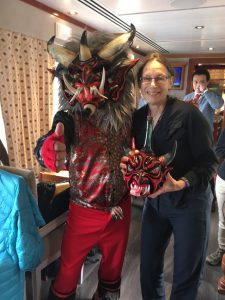 At unexpected times, the train staff presents us with little treats and surprises.  The government is supporting local indigenous crafts by giving us passengers small handicrafts and providing an outlet for artisans in their train stations.  In addition to our luxury train, there are a number of fairly inexpensive tourist day trains run by the Ferrocarriles del Ecuador, without any frills but with hopefully the same spirit of hospitality.  Below our lunch on the train. 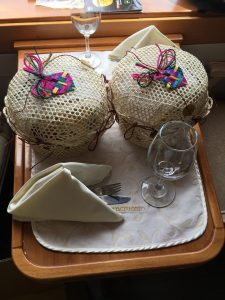 We have changed to a diesel locomotive and continue to climb until we reach Boliche, at 11,500 feet, one of the highest train stations in South America.  Boliche is a green preserve, once barren and now reforested by immigrants with non-indigenous plants, like the California Pine which covers part of this landscape.  The government is now attempting to return this large park area to its natural state.  Llamas and alpacas roam around the fields here and it is cold.  I have a slight altitude headache and one of the local fellow passengers from Quito suggests I have some coca tea like the natives use.

The TV crew has been continually on the move, up and down the cars, hanging cameras inside and outside the trains, recording us ascending and descending and filming some individual interviews as well.  They jokingly remarked that it would be great if something unexpected happened and their wish came true — between Boliche and our next stop, a maintenance train car derailed while trying to help a car on the tracks.  So we can go no further at this time and will go onto our afternoon activity by bus with the hope that the stoppage will be fixed so we can rail to Quito this evening.  We are taken, after some direction mishaps, to a wonderful 1906 Hacienda, where a family now runs a ranch with horses, as well as llamas, alpacas, vicuna and steer.  We watch a truly marvelous horse show with young expert horsemen, led by the older owner and a dedicated rancher, showing us with pride their homemade cowhide lassos and bridles, quite disdainful of the American cowboys’ nylon ropes. 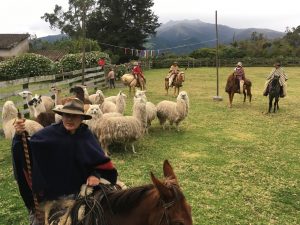 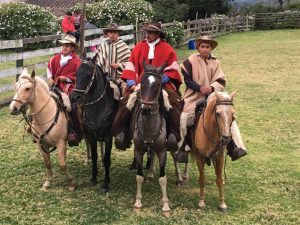 Gathered in the antique living room of this hacienda with wallpaper and decorations from the early 1900’s, we are told that the rail blockage can not be fixed tonight and the we will be going by bus to  Quito with all of our belongings, left scattered on the train, to be transported and sent to our hotel rooms at our 5 Star Hotel.

Which transfer was executed perfectly – not many companies could have managed this, moving many small pieces of personal belongings from the train to the correct rooms.  Kudos to Tren Ecuador who could not stop apologizing for this change in plans which actually had little negative impact on us travelers.

More train pics from today:  Black Monster and some of the numerous railway guards. 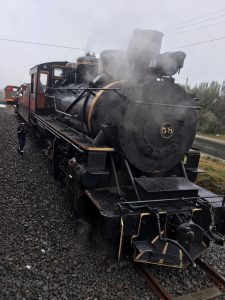 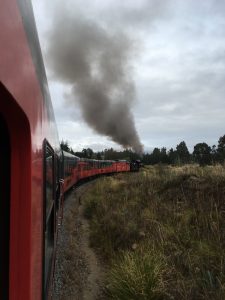 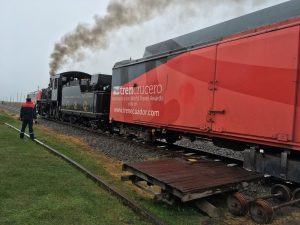 It was an exhausting day and I stayed up to get Day 2 out to you — with a wakeup at 6 am this morning!