Today we take an all-day tour from Kasane in Botswana to Victoria Falls in Zimbabwe, one of the great natural wonders of the world.  The border checkpoint on the road between the countries reflects much about the difference between the two governments.  The Botswana side requires no fees of us, just an arrival and departure card, with smiling and friendly immigration staff quickly passing us in and out of their facility.   The Zimbabwe side, a short distance away, required a one-hour wait in a long line until two officials with surly diffidence issued each of us a visa for US$30.  A gentlemen traveling with us, a Dutch man managing a dog-sled company in Finland (you meet interesting people when traveling!), said he handed over $200 for the $120 in visa fees for the 4 members of his family and waited and waited for change for which he finally had to ask and then he stood by while the officer slowly counted out $70 and handed it over — until he demanded the other $10.  Corruption appears to be a way of life and perhaps a survival mechanism in Zimbabwe. 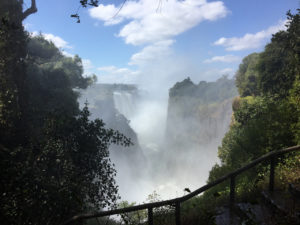 I had been on the Zambian side of the falls two years ago but the Zimbabwean side seems much closer to the powerful water — and much much wetter.  We rented yellow ponchos to protect ourselves from the continual fine spray which saturates all vista points at this time of year.  It is such a strong experience to stand next to the huge surge of the waters and to see the gigantic curve of the main drop-off creating the falls.  I can only imagine the reaction of anyone, both the local people and the first visitors from Europe, when first hearing “the smoke that thunders” (the indigenous name of the falls) and then seeing and feeling this natural phenomenon. 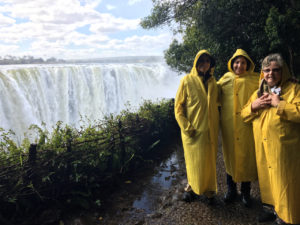 On the way there and back, we saw some of the other side of the tourist coin, the poor housing in both Botswana and Zimbabwe for those who did not catch the ring of fortune on this merry-go-round.  Small concrete block boxes, maybe 14′  x 20′ or so, with corrugated metal roofs and an outhouse somewhere nearby.   I know nothing about the socio-economic spread of either country but can see enough to recognize that the generations of European settlers still control a good percentage of the wealth with more recent political changes generating a noticeable middle class of local people as well, at least in Botswana. 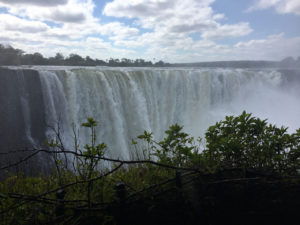 Local is a relative term.  At our lodge in Kasane, we talked to our manager, whose English ancestors have been farmers here since 1820.  We asked about racial integration in Francistown, the second largest city in Botswana, where he was born and his wife and child live.  We got an answer about there being no racial issues and that the country was a healthy mix — but listening to him we sensed that all his school and current friends were white. 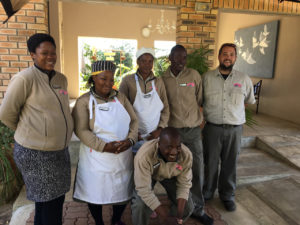 Our staff at Tlouwana Lodge. We sang a goodbye song to them.

Arriving into Capetown was moving back into the comforts of our accustomed lifestyle, a modern beautiful city replete with all accessories of 21st century life — except sufficient water.  The water shortage here has mandated showers to no more than 2 minutes and catching water in basins from sinks to be reused for toilet flushing.   Hedy and Lesley will have 4 days to explore this exceptional city while I return home.

Flying out this morning from Cape Town, I passed over a large stretch of South Africa and was amazed by the richness of the land below me.  A saturation of green fields, divided for various agricultural uses, with mountains separating valleys which looked like the Garden of Eden from up high.   With such richness, I can understand why wars were fought over this land’s  possession — not to mention the invisible value of the mining resources within.  I do not pretend to know anything about African history and only a little about English history.  I do remember, however, that the English supported the abolition of slavery considerably before it was won in the United States.  And yet the British continued without constraint to encourage a strict policy of Apartheid in South Africa until the early 1990’s sustaining, in effect, economic slavery for those not born white.

I end this travelogue here, flying toward the U.S., having journeyed from the desert sands of Namibia, through the friendly capital of Botswana, to the rich wildlife of the Okavango Delta  and the Chobe River and ending with magnificent Victoria Falls, before returning back to the complex urban life of Cape Town.  It was a pleasure traveling with Hedy, Lesley and Richard, experiencing some of the beauty though their eyes and reflecting on the unique nature found in this part of the world.