The most common image of Africa is the mighty maned lion.  From the stone sentinels of the 42nd street library in New York to MGM studios’ opening roar, the lion has always appeared in our American iconography as a symbol of great majesty and power.  So imagine our thrill to spend several hours close, very close, to a stalking male lion and his female mate.  This happened in the Moremi Game Reserve where Richard, Jo (a New Zealand fellow traveler) and I decided to spend the entire day driving in the park while Hedy and Leslie relaxed in the morning and went on an afternoon game drive.

We were not the only vehicle that spotted the male lion and his proud and beautiful mate who came and joined him in the wide open grassy area filled with delicious deer-like red lechwes. There quickly appeared safari vehicles from many nearby camps which heard the word of this spotting.  But we were the vehicle with the most skilled guide/driver who knew how to maneuver so that wherever the lions roamed, we were right in front of where they appeared on the road or in the fields.  I told our driver Ninja that he must be part lion to have intuited exactly where the lions would next appear.  Ninja said it was skill, not luck. 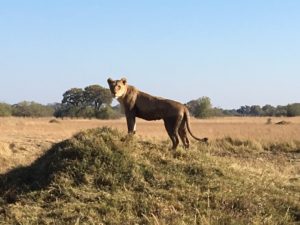 We followed immediately behind the male lion as he calmly walked along the road, sat regally in a field, and then waited as the lioness began to streak in front of us and unsuccessfully tried to chase down a lechwe for breakfast.  (I have a video of that attack but can not attach it here). The large group of lechwe stood stock still with ears raised in awareness and when they sensed the lioness in attack mode, took off in a split second to jump high across the water and escape imminent demise. 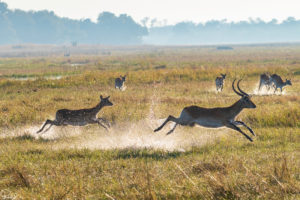 The large cat seemed to give up and we followed the two for quite a while until she sat on a termite mound and surveyed the landscape looking for other prey.  She tried once again to catch some food but by then it was getting hot and she appeared to give up for the day.

Coming up on the Lioness

The experience of being next to these hunting lions was emotional and a little overwhelming.  We were all exhausted from the two hours spent with these magnificent creatures. 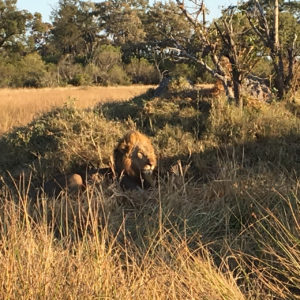 I will note that it is the lioness, not the lion, who should be the symbol of strength and endurance, as it is she who does the hunting and brings home the bacon, so to say.  Sleek and strong, it was amazing to watch her so close going about her daily work to catch her prey. 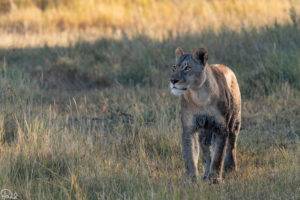 We heard the next day, that in that evening, this same pair brought down a hippopotamus that had appeared to be sick (possibly with anthrax).  We and the other voyeurs of this wild land drove to the site and found the female sitting in the sun with a full belly while here mate sat a little distance away, next to a large downed hippo with it brain and innards now gone.  I am not posting that photo as it is rather gruesome. 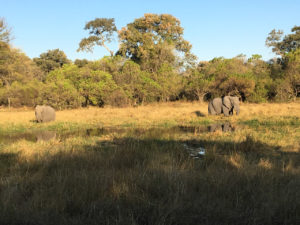 Our delicious picnic lunch was by a large pond with a raised wooden covered platform (called a hide) from which to view the whole area where hippos bathed and crocodiles slinked in waiting for their next meal.  Quite memorable is the wooden hut nearby this area in which was a  toilet as visitor are to to leave their vehicle to pee.  After I finished in this encloure, Richard went in and came out with a photo of a large really scary looking spider he spotted on the wall near the commode.  Our guide looked at the photo and said it was quite poisonous and its bite could kill an adult.  It was dark inside and I am mighty glad I did not touch the wall by accident! 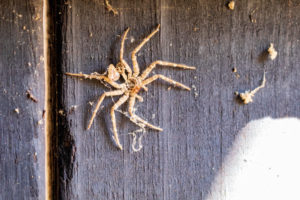 Richard’s photo of the spider

It was a wonderful day, full of excitement and variation of landscape and animals, to be long remembered. 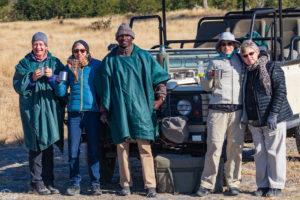 Richard’ photo of our group with our New Zealand friend Jo

The next day:  It is hard to get up in the dark when it is very cold inside and outside as well and the bathroom is in an open-air enclosure with wind whistling through the many openings.  I don’t like cold.  There is a small fire by which to warm our hands and face before sitting down to the dining table under canvas for breakfast.  Cold cereal (I brought my own soy milk), hot toast (I brought my own peanut butter), fruit salad, muffins and tea.  All four of us are together this morning as we head into the Khwai Concession area, right across the border from the Moremi Reserve.   A truly beautiful lilac-breasted roller sits on a fencepost for us as we begin our expedition.  The trees and grass move by a breeze in the early morning light and the animals are still out before the sun make them sleepy. 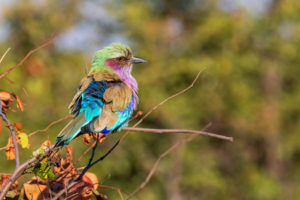 We head down a narrow dirt road and suddenly come across a large male elephant in the road who is startled by us and we come to a complete stop and look at each other.  He then makes threatening noises, his ear wave and his trunk swings up and he goes into, what Richard said later, a “mock charge” but it gave us an adrenaline-soaked fright.  Ninja revved the engine, the elephant (whom we were told later was in musth, pumped full of testosterone) backed up and we quickly sped around him.   Enough excitement for a day (maybe a year). 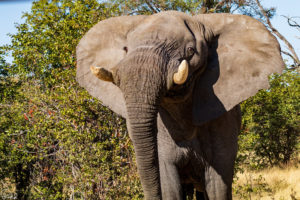 Richard’s photo of the angry elephant

In the afternoon, Richard and i went out with a lovely family from England and what stands out the most were the large herds of elephants, including mothers and babies,   Among the other sights was a dazzle of zebras with a baby nursing from its mother surrounded by its black and white striped friends. 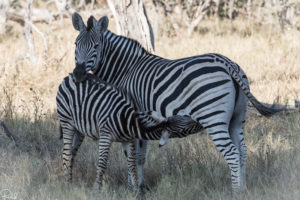 We saw a magnificent Verreaux Eagle Owl, a very large bird, quietly waiting in a tree for the night and its hunting time.  We saw hippos and crocodiles, warthogs and the ubiquitous impala who pranced and jumped their delicate bodies in the woods. 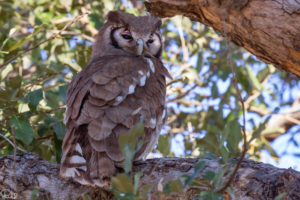 We stopped for our sundowners to view a magnificent red sunset and end our time in the Okavango Delta.  I was expecting a more watery environment and indeed I heard of camps in the Okavango on islands surrounded by rivers.  However, what I treasure most is traveling through the dry grass and trees, looking at the plants and shrubs, listening to the birds and the rustling of animals in the bush.  And feeling the awe of being alive in a magnificent world. 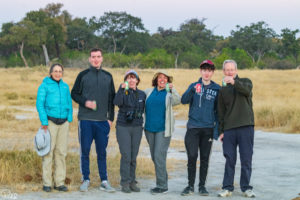 Richard’s photo of Varya and our English friends

If you want to see all of Richard’s fabulous photos, here is the link:https://www.photosrm.com/Places/Travels/Khwai–Okavango-Delta-July-2018/