Our last day in Japan is  spent visiting Nara, the earliest capital of a united Japan back in about 700 AD.  As we stand before the oldest wooden building, Horyuji,  a Buddhist temple re-built in 703 (after the original burned down in 600), it is truly difficult to comprehend the passing of so much time and the history through which this place has survived.   When we think of the Egyptians or the Greeks or the Romans, we picture civilizations that look very different from today.  But these entrance gates, temples, and bell towers in Nara are built very much in a style which was still common more than a thousand years later. 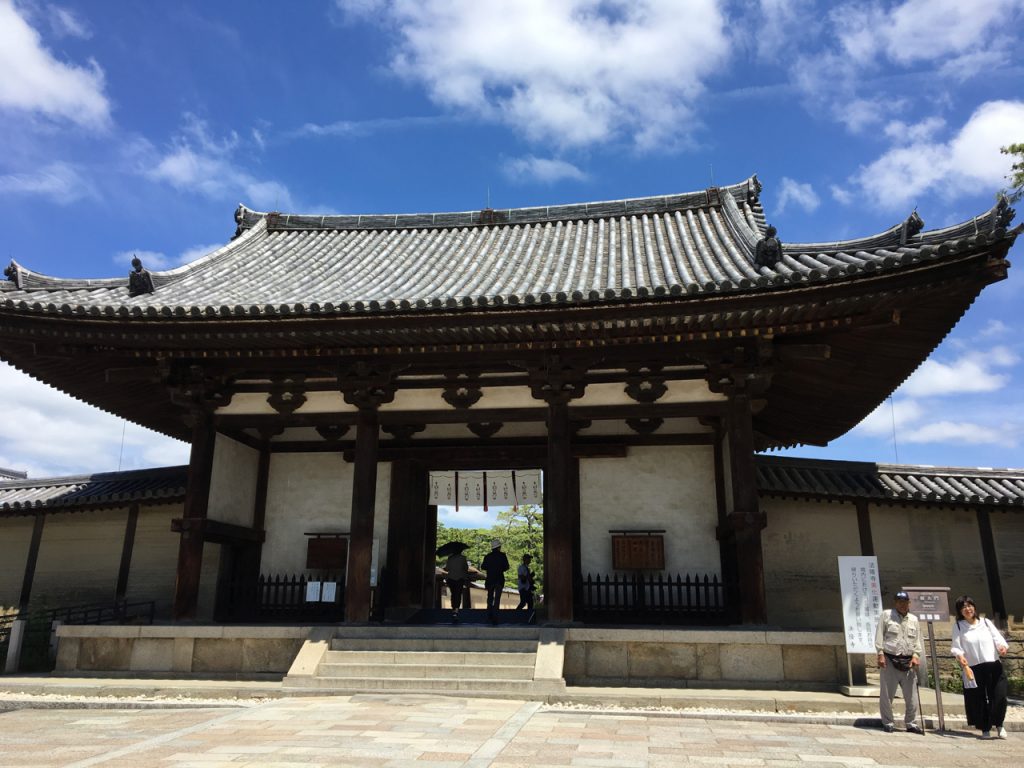 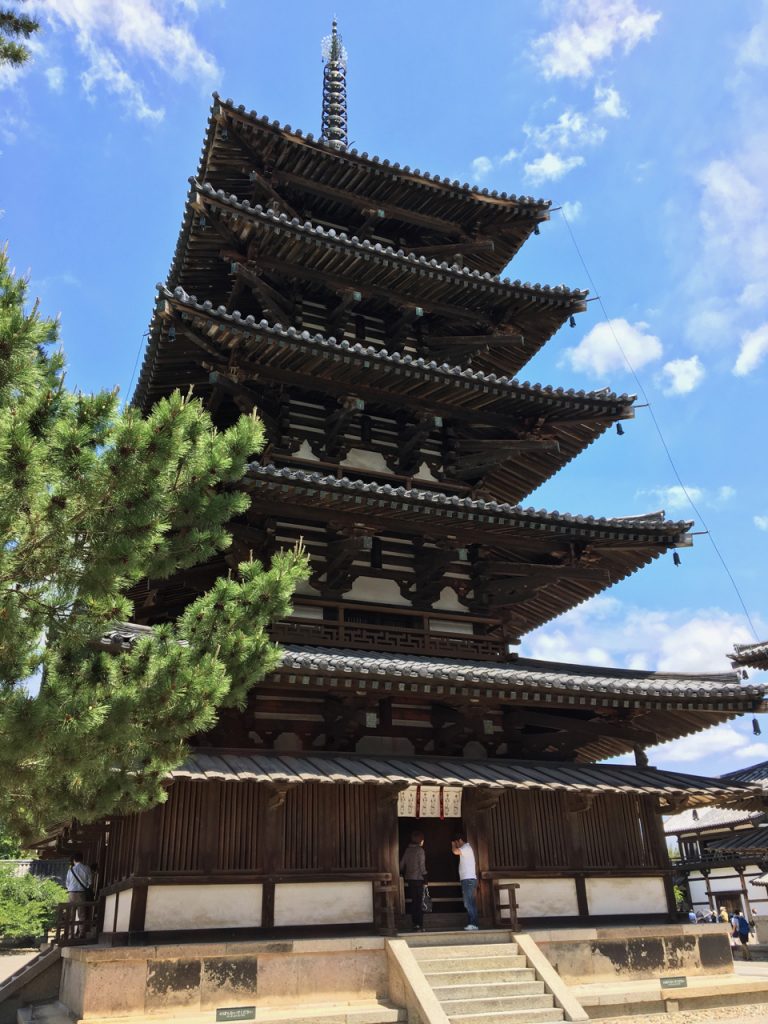 Horyuji, our first stop, is quiet in the morning right after it opens with very few tourists.  We can walk across the raked gravel and wonder at the still-standing structures.  There were many other buildings that were burned down over time but these somehow survived, although many parts have been replaced and repaired over the centuries. 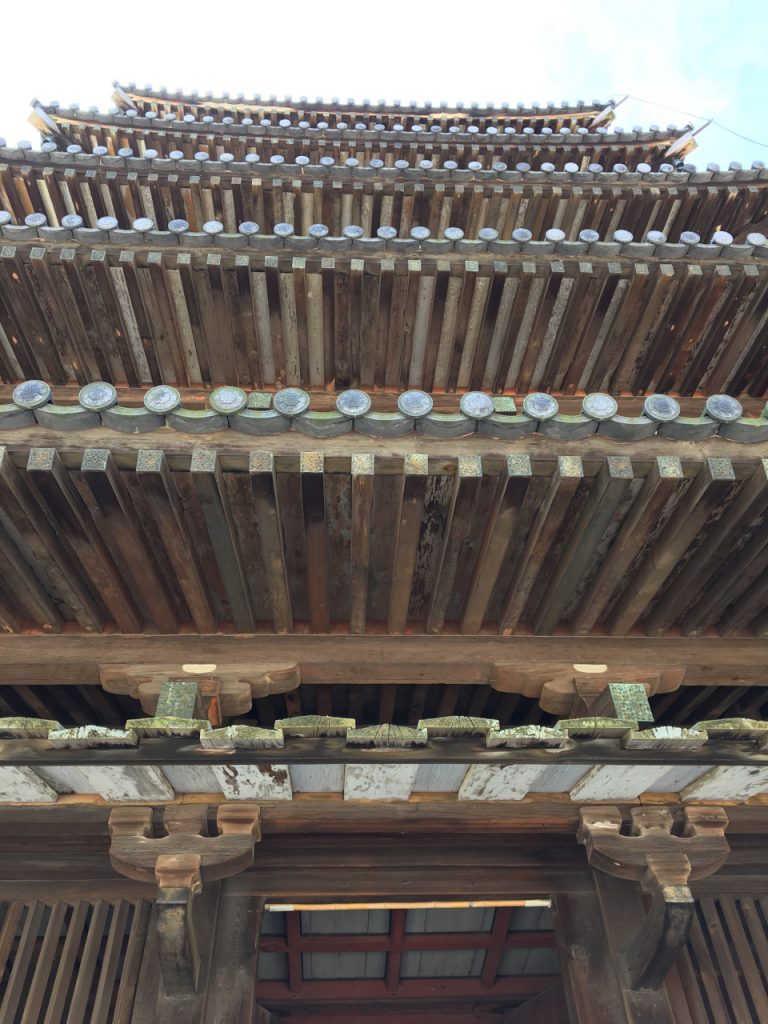 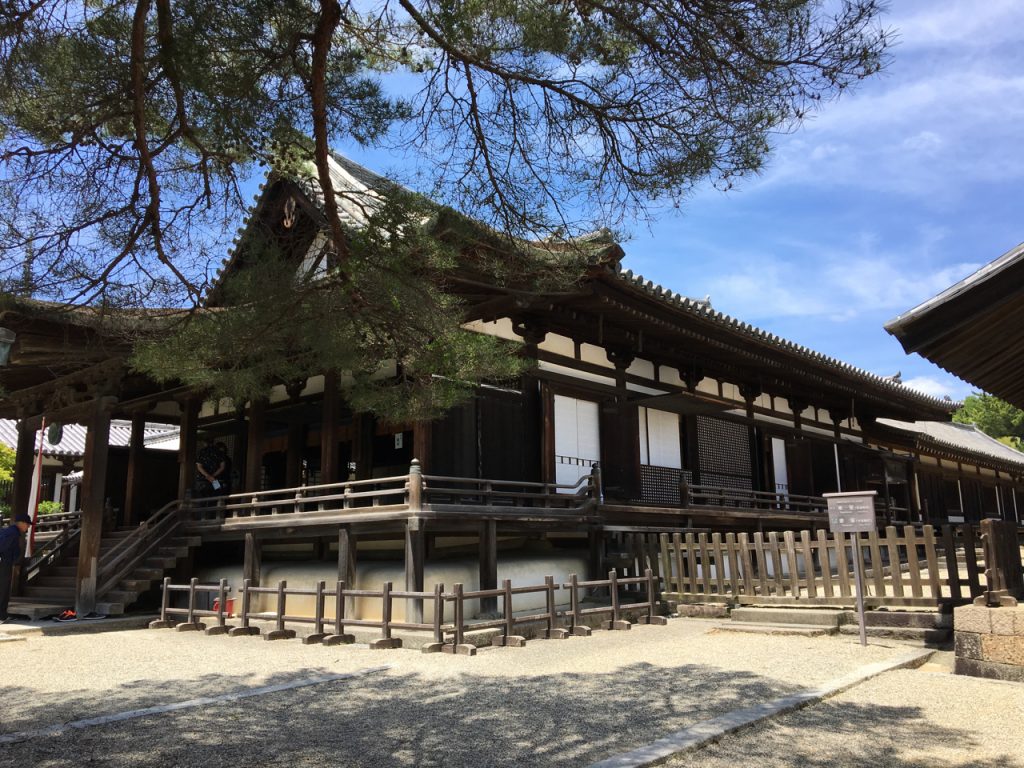 Our second stop is its antithesis in environment: Todai-ji, the largest wooden structure in Japan with a massive bronze Buddha inside.  In the afternoon it is flooded with tourists as well as herds of roving deer famous for their freedom in this park.  We read they have been biting visitors who have been teasing them with food.  They are trained to bow their head three times when begging for food, which our guide showed us how to encourage.  Some deer are sleek and some are mangy  – the effects of overpopulation are visible.  And it is necessary to watch ones step to avoid deer droppings and to watch ones arms to avoid knocking into another visitor taking a photo. 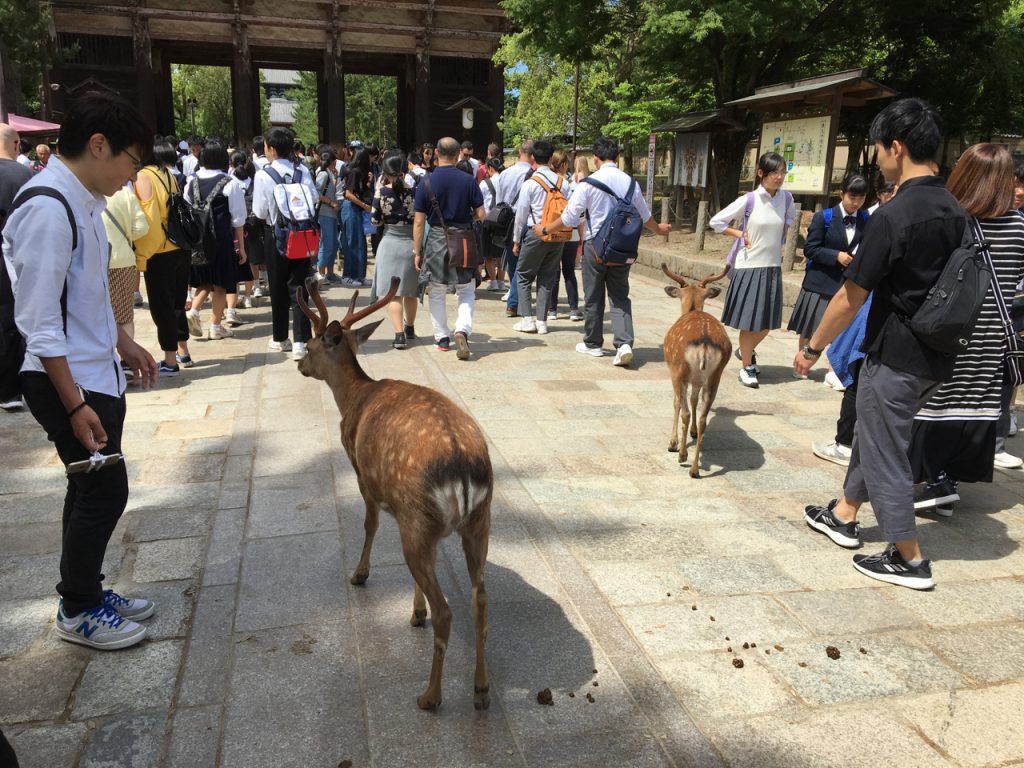 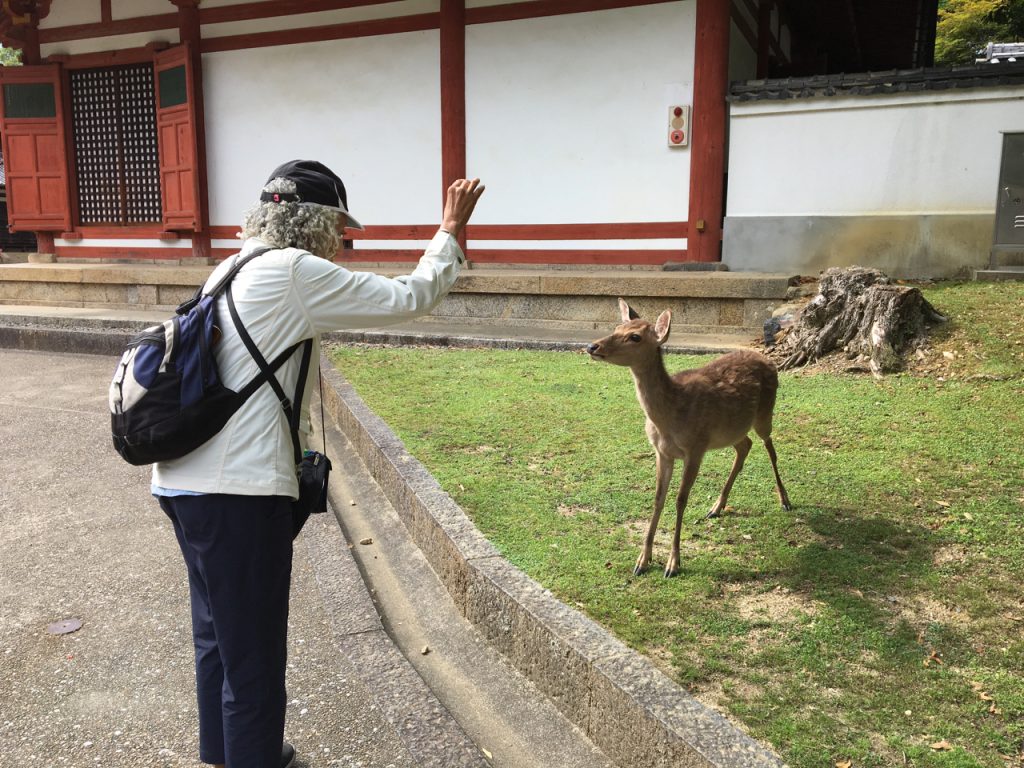 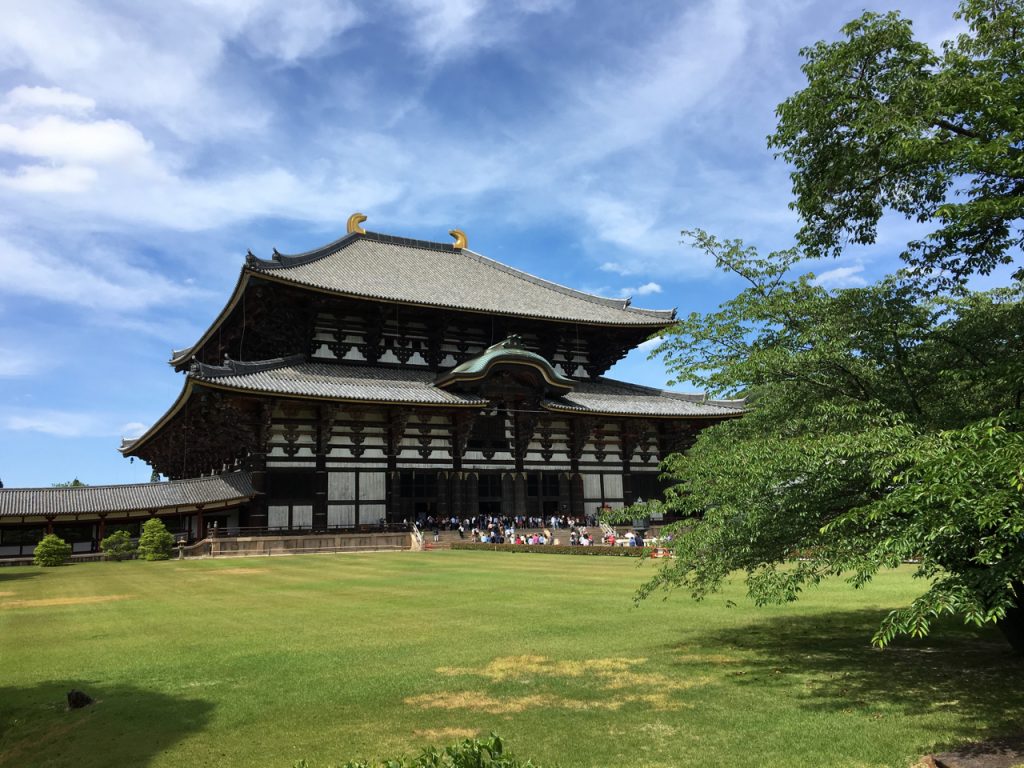 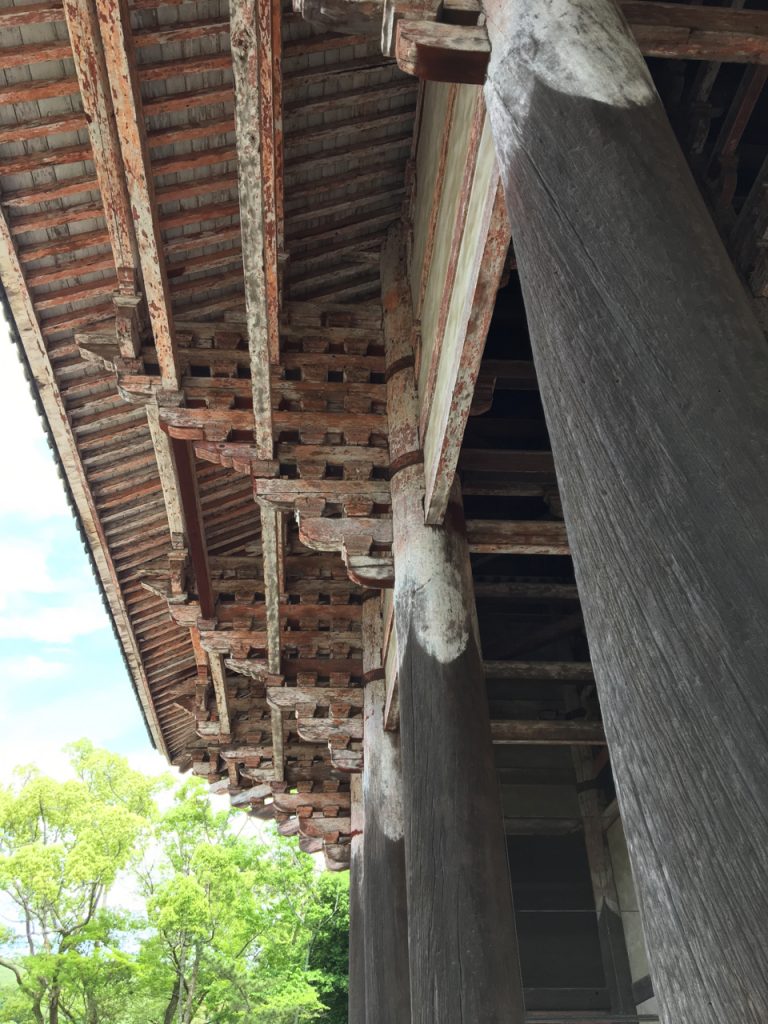 The enormous Buddha statue is impressive as well as other ancient artifacts around the main temple site. 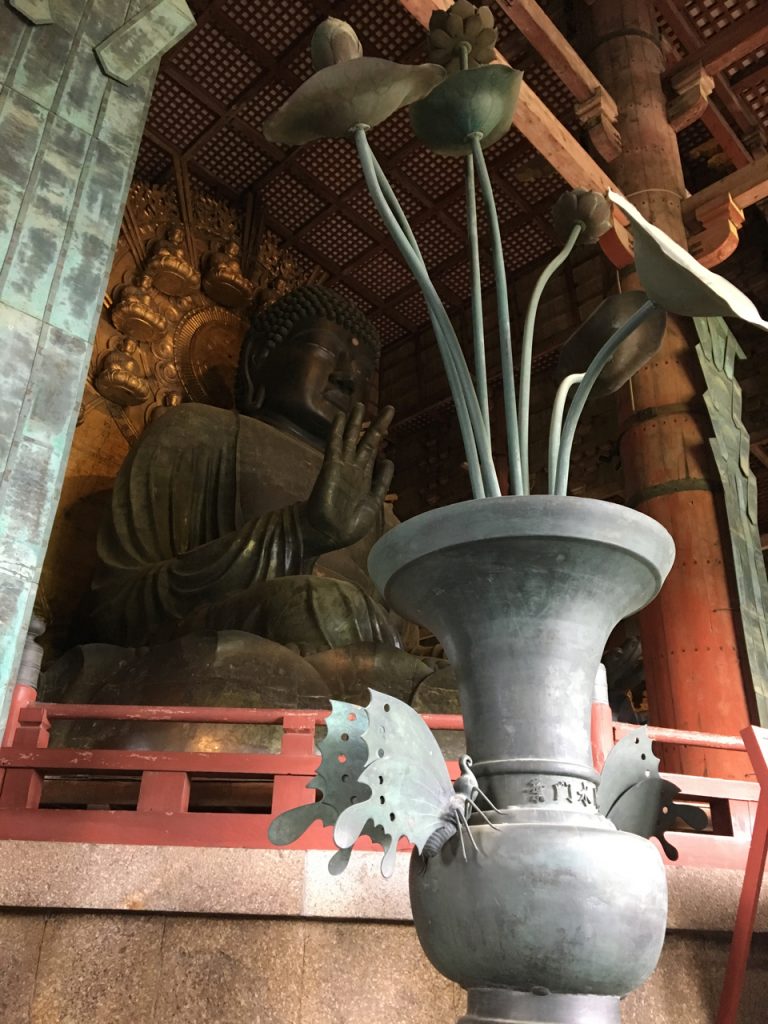 In addition to stands offering food for the deer, there are innumerable stands, once again, selling green tea softserve ice cream, which now seems endemic wherefore there are tourists. 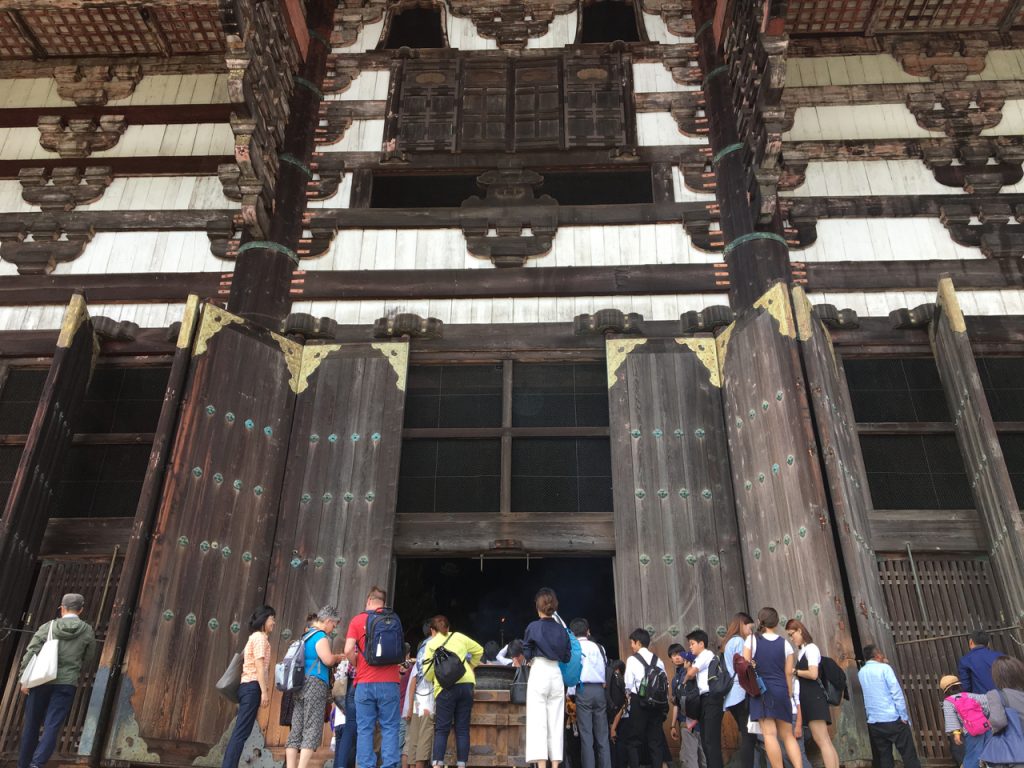 We have a wonderful guide who lived for 5 years in San Bruno, CA as a Mitsubishi bank manager and from him we hear about the struggles of Japanese who send their children abroad for education and then see their culture disappear in the miasma of other sets of behavior and language adopted by the next generation.  A pattern happening all over the world.

As I end this blog for this wonderful journey, I contemplate how some other cultures, mainly in Europe, live with remnants of their past in the shape of their ancestral buildings, such as village cottages in the Cotswolds, stone buildings and castles of Germany, and the bridges and squares of old Prague.   But the past seems more pervasive in Japan, where the older temples and small houses stand everywhere in their narrow spaces, in stark contrast with large modern structures growing up around them and where neighborhood shrines are still regularly visited.   Despite the great disparity between new and old, the Japanese seems to carry a greater continuum of their culture with them today through their attitude and behavior towards each other.  Polite and efficient, genuinely helpful to others and gentle in manner.  It is easy to transpose these characteristics back in time to the fabled eras of honored Samurai men and cherry-blossom maidens. 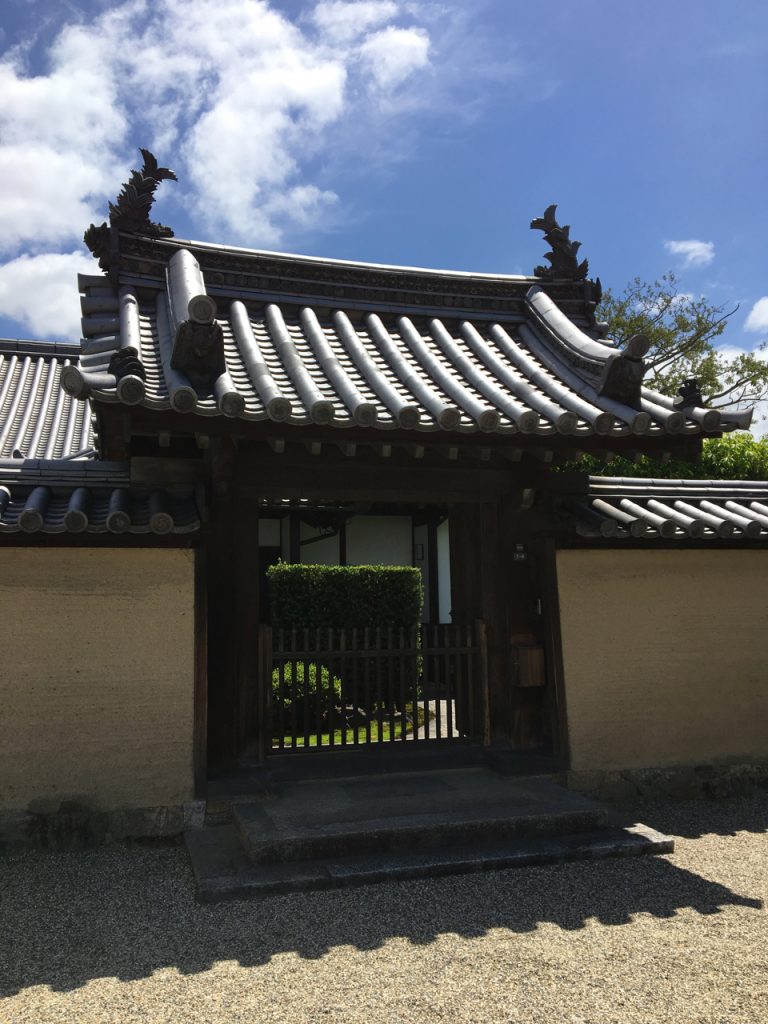 We end our journey together with a dinner at an unusual restaurant around the corner from our hotel and a last morning walk to the Nijo Castle before heading for the airport.   What will we each remember foremost of this trip?   I haven’t yet asked the others but for me the visits to the Frank Lloyd Wright Buildings and to Meiji-Mura will stand out as highlights.  The Wright buildings stand at the end of the Meiji period before World War II and are emblematic of the great changes wrought by industrialization and contact with the developments of Europe.   But I also flash back on the incredible wooden temples which remain as the symbol of Japan and which are so unique in the world and universally acclaimed of outstanding beauty.  Japan, as always, shows herself as a land of great contrasts. 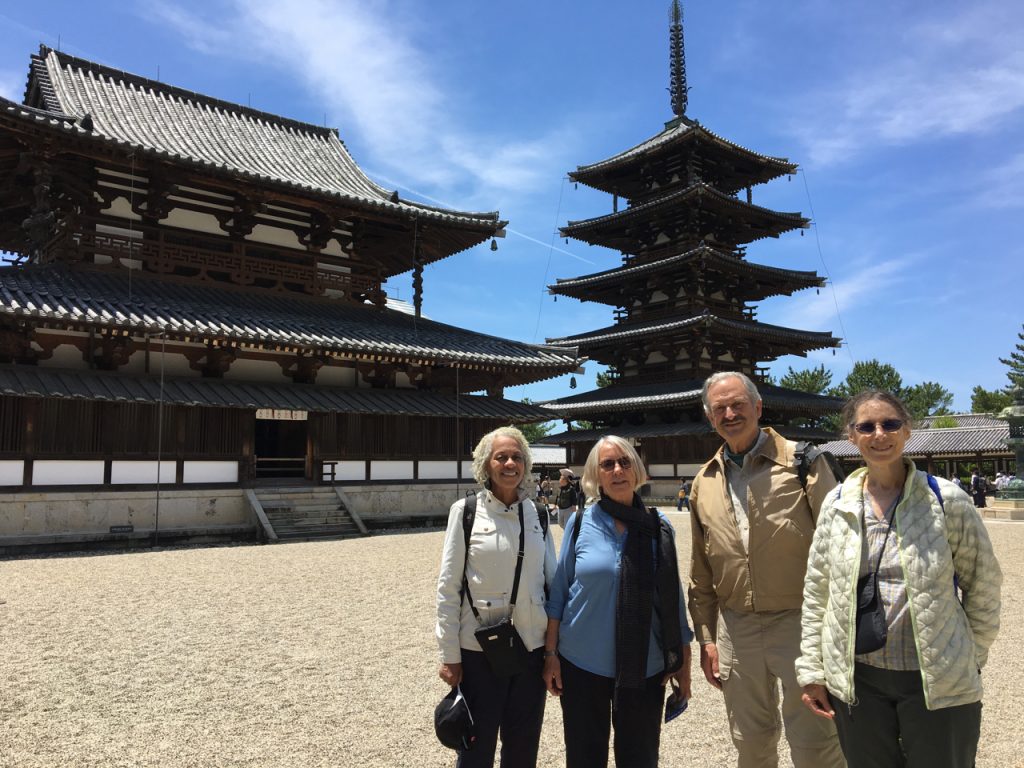 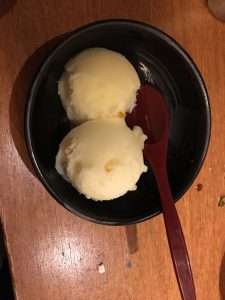