Ise and Nagoya are the yin and yang of Japan:  Nagoya, an industrial capital and heart of the Toyota enterprise, and Ise, the most ancient sacred heart of  Japanese culture.

Hidden away in the countryside north of the city of Nagoya is a phenomenal place – the Meiji Mura Museum.   It is truly a Disneyland for Japanese history and architecture enthusiasts.  We were all completed surprised and astounded by our experience there. 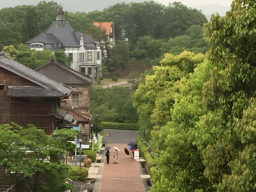 I had known that it was the location of the preserved front of the great Imperial Hotel inTokyo designed and executed by Frank Lloyd Wright which was demolished in 1967 — but what I didn’t know was the extent of the grounds, around 250 acres, and the great number of other Meiji Era buildings which were relocated, mainly starting from the late 1960’s, and reconstructed on this beautiful site.  This was not just a rebuilding of the facades of buildings, but the reconstruction of entire large structures, such as imperial administration buildings, the main post office of Nagoya, a large scientific institute, an important bank building, as well as smaller historical buildings, such as a barber shop, glassblowing factory, small theater, a steam train and cable car, all exhibiting the transition from traditional Japanese style to Western style construction.

In front of Imperial Hotel 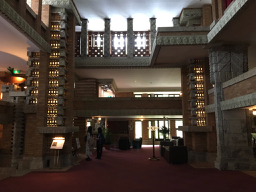 Detail of lobby in Imperial Hotel 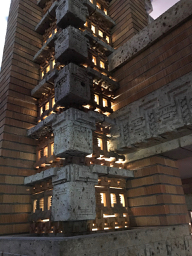 Detail of lighting in Imperial Hotel

You could walk in and wander through these buildings, mostly unfurnished and unguarded, filled with exhibits and historical information.  Bill and Trisha spent all their time at the Imperial Hotel, which included a larger area than I was expecting, with a tea shop and several lounges, while the rest of us walked through the prisons, the factories, and the mansions of a bygone era. 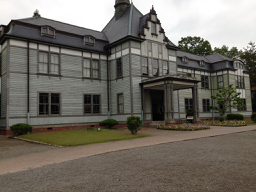 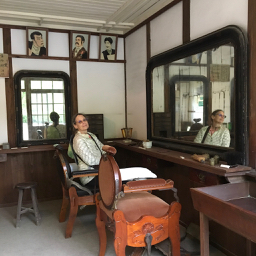 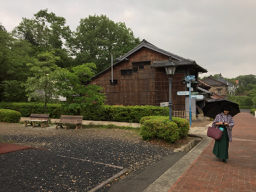 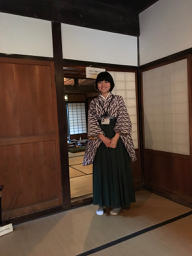 Our Guide at an Old Japanese House 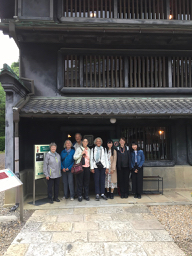 I think our experience was enhanced by the fact that it was beautifully cool and overcast and that there was nobody there — we were often the only visitors in sight and the only non-Japanese tourists.  What an incredibly undertaking and statement of a culture’s investment in its historical past to create such a place! 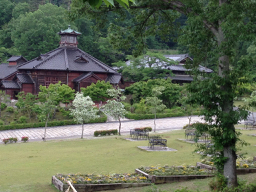 Even an Old Prison

We were accompanied by my friend of 25 years, Kumi, and her daughter Ami, who live in the area and met us for the day.  When we returned to Nagoya we visited Kumi’s younger daughter Micki who works in the umbrella department of the Takashimaya Department Store.  That was another eye-opening experience.  Floor after floor filled with shoppers, mostly young – and even the umbrella display was staggering in extent!  After dinner we walked back through the underground mall system which once again surprised us by the cleanliness and variety of stores and restaurants.  Nagoya seems a small cosmos of a thriving community and I would like to spend a few more days here to enjoy the many museums in the area but other adventures await.

Our next day was spent in a very different kind of venue:  visiting the sacred shrines of Shintoism on the Ise Peninsula.  After a train ride South, we met up with our very enthusiastic guide who took us to an old rarely visited Shinto-turned-Buddhist temple, which serves as a final resting place for beloved pets. 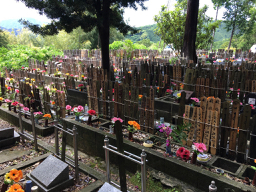 The monk there showed us inside the main hall where he displayed both the gongs, cymbals and bells used in his rituals as well as an incredibly intricate 800-year old Chenrezi/Amitabha statue 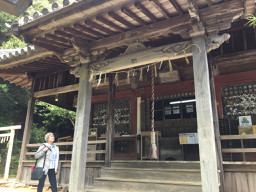 The “wedded rocks” are part of the ancient Shinto purification rituals and are seen on a beautiful walk along a wind-swept shore – withgood-luck frog statues everywhere. 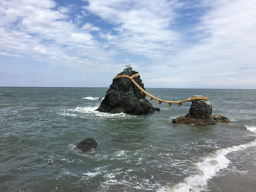 Finally, into the heart of Shinto belief and the great shrines of Geku and Naiku, living places of worship, secluded in forests maintained by armies of gardeners and tree experts for thousands for years.  Great towering cedars and cypress, huge camphor trees and areas of meticulously pruned bonsai pines. 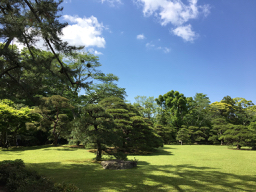 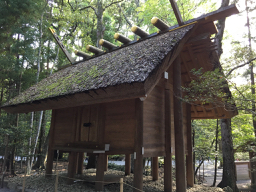 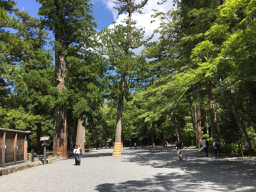 The main shrines themselves can not be seen by mere mortals – that is only for the god-like emperor — but the unpainted wood with pure gold decoration, the great tori gates and bridges over the purest of running water creates a peaceful hushed atmosphere. 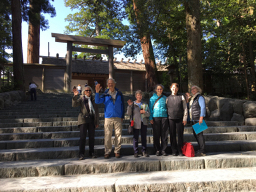 One could feel how the connection between man and nature, at the heart of Shinto belief, is palpable in this very special place.  With forests grown and protected for 5 generations of families to allow the continual reconstruction every 20 years of each of the many small and large Shinto shrines in Ise Jingu area, this is indeed a marvel of man’s ability to appropriately work with nature to maintain its pure state. 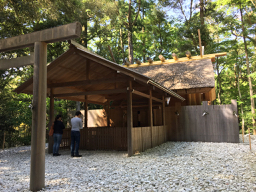 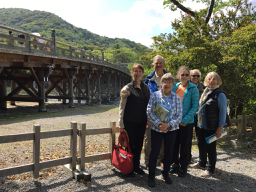 The hedonists among us (i.e. all of us) then walked through the small local community dedicated to feeding and supplying the hoards of tourists and worshippers (once again, it was very empty on this date), enjoying the gorgeous small shops that were selling foods we were unable to recognize – except for the well-known soft serve ice cream which provided refreshment for most before we took a bus to the train and back to Nagoya. 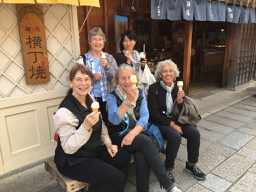 We take hot baths together almost every night in the womens soaking area of the the hotel  — a relaxing ritual and helping us all sleep a little better at night.