New Years Eve in Delhi:   It is already 11:50 when I leave my friend Sue at her hotel and get into my Uber car for the ride back to my room at The Claridges.   It was very difficult to get a cab  at all as everyone is taking time off for this annual change from old to new.   The car is not like an Uber back home — it is quite old, small and worn out and has no seat belts, like every other cab in Delhi.   There is increasing fog and there are police barriers to slow traffic down, placed in a slalom style so vehicles need to swerve right and then left and then right again to get around the obstacles in the way.   In the middle of this, as the new year happens and firecrackers go off and horns are honking, my driver gets phone calls, one after another, which he answers, now driving with one hand through the fog.  Oh, I love India!

This is may be partly explained by a kind of fatalism born from generations of living life at the edge.   My educated friends tell me the local pollution, which is at a very hazardous level, is nothing to worry about as it is just from dust and smoke.  At this degree of pollution in the U.S., we would probably be required to stay quietly indoors.  My local friends drive their children and grandchildren with no child car seats or restraints at all – they do not even use seat belts for themselves or their family although they have a brand new Toyota equipped with all safety devices.  When I ask about this, they laugh.

My two days here so far have been good, although without enough sleep.  Seeing the lights of Delhi below as we land always catches my heart and takes me back to my first international arrival on Pan Am 1 to India in 1965.  The roads in central New Delhi are wide and empty at 3:30 am, the street lights filtering through the fog and smog across the large trees and gated estates that contain the embassies, government offices and once grand homes of the royals of the princely states and the great Indian industrialists of the 20th century. 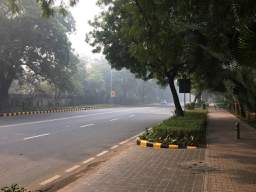 I spend time visiting some sites I have not seen before:  the National Railroad Museum, housing probably the world’s largest diverse collection of ancient steam locomotives from the many princely states and private rail lines at the very end of the 19th century.  The park is filled on a Saturday with families and children waiting to ride the toy train and clambering up on old engines.  I am the only tourist in view. 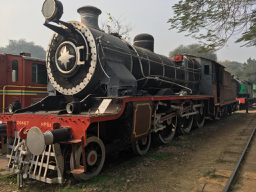 Gandhi’s Smrti Museum is located at the great Birla Estate where Gandhi-ji was assassinated in 1948 in the midst of intense debate about the future form of the country.  It is filled with placards detailing his life but it feels more like rhetoric than a personal outreach about his credo.

The National Museum encloses an extensive collection of Indian art, from archeological finds to the great bronze religious sculpture of South India to Mughal and Tanjore paintings — at least what was left behind when the British left with a vast amount of India’s indigenous treasures.  The plaques next to the art say nothing about their provenance — whether purchased or gifted and I wonder how they came to this place, especially in the case of the Tanjore Paintings which I know were created and lived their time as a sacred part of individual home altars.  Sold out of economic necessity?   Looted and purchased? I actually looked for a curator to ask but it was Saturday and no one was available.

The first day of 2018 I spent with a U.S. friend who has lived many years in Delhi.  We take the Metro, a relatively new subway system, passing through the armed guards doing a security check at every entrance, to the neighborhood where the Tibetan refugees have settled in this metropolis.  We thought the subway stopped nearby and we should have been suspicious when all the red robed monks got into motor rickshaws but we decided to walk.  We hiked through the broken remains  of construction, dodging around speeding vehicles of all types as the roadsides are packed with small stalls and objects big and small that require stepping into the street to pass.  We finally came to an overpass which led into the narrow lanes of an area filled with the artifacts of Tibetan life:  prayer flags, blankets, dried foods, small statues for the tourists, shoe shops, travel agencies, and restaurants serving the iconic momos and thukluk of Tibetan cooking.  We take a bicycle rickshaw back to the station and then to Khan Market, a high end shopping area and in direct contrast to our explorations earlier in the day. 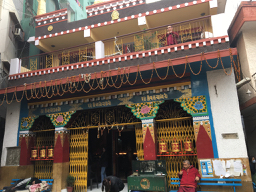