It is difficult to describe the beauty of the beach we just left at Cerro Brujo on San Cristobal Island in the Galapagos archipelago:  the softest white sand and the the blackest lava scattered around the shoreline with turquoise blue water and no people.  And then you turn and look a little more closely and see sea lions a few feet away, black and various colors of brown, some still nursing with their mothers, some large bulls, playing in the water right in front of you or sun bathing on the sand.  Or a large black marine iguana, 2-3 feet long, dragging itself up the beach, leave its tell-tale tracks, moving toward the ring of green that borders the sand.   It is our first bright, sunny and warm day. 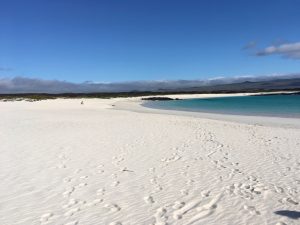 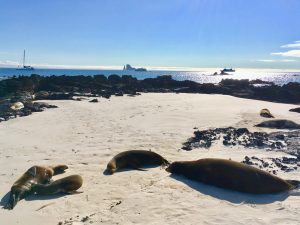 Cerro Brujo is on a spit of land near where Darwin first landed on these islands.  And next to it are high basalt cliffs, almost vertical, with spectacular entrances into grottos and arches carved out by erosion, which we visit by our expertly piloted rubber zodiac. Anemones and barnacles line the bottom of the cliffs and bright red crabs dance around with an occasional dark marine iguana for company as well as the sudden soaring swoop and dive of a blue footed booby looking for its dinner.   Our guide tells us one place is called the cathedral, a magnificent cleft in the rock face into which we are masterfully steered with the blue waters below and the white traces of bird guano splattering the walls of this breath-catching space.  The geologic history of this island is displayed in the striated layers of color on the volcanic rock. 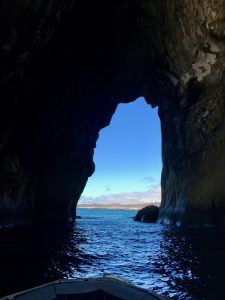 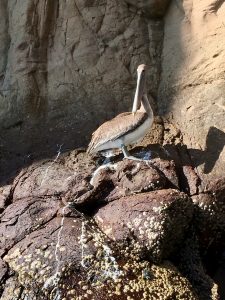 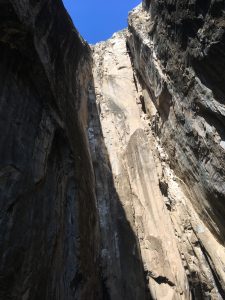 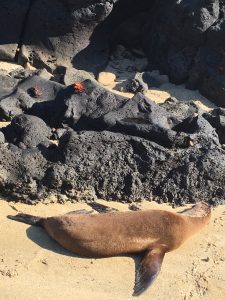 When I first looked out the window of my cabin after the engines stopped near Cerro Brujo, I was met with an image out of a sci-fi story – a sharp rectangle of stone jutting up into the sky along side a conical needle next to it — called The Kicker Rock, named after a similar formation in Scotland.   After our beach excursion, back on the ship for cocktails, we watched the sun set behind this great monolith while frigate birds, large, swallow-tailed and silent, swooped soundlessly overhead, aided by the wind and their large out-stretched wings. 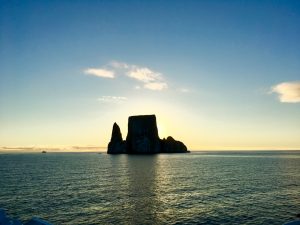 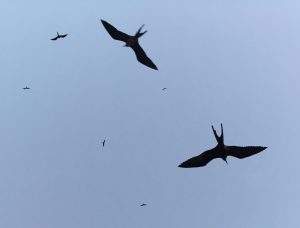 On the other side of San Cristobal, the only island with a fresh water supply, is a small town where the 21st century collides with the world where Charles Darwin once walked.  A short drive away is the Giant Tortoise Nursery where the eggs of the species of the giant tortoise once plentiful on this island and then killed by hungry sailors are nurtured until they are old enough to be released back into their natural habitat.  These land amphibians are impressive to behold as you maneuver around them on the path, large and slow, tucking their heads in as you pass.  Many endemic birds land on the deciduous trees, a much greener environment then we had previously experienced. 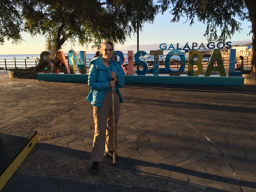 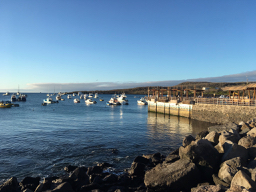 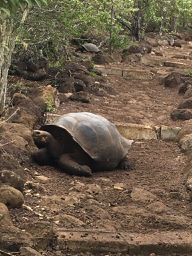 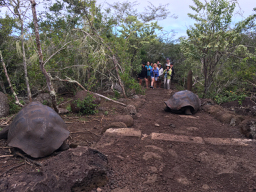 Yesterday, we landed on a beach at Punta Pitt, and take a long walk uphill hopping along on volcanic rocks through gullies formed by erosion.  There we found the renowned blue-footed boobys as well as the red-footed booby birds, nesting, feeding their large white fluffy fledglings, as well as still maturing juveniles right on the paths in front of us.  It is amazing to walk right next to such amazing creatures.  Our excellent naturalist tells us all along the way about the ecology of the area and points out small creatures we might not otherwise see.  The path we have taken is not easy — as we clamber up some fairly high rocks at a good pace.  My workouts at the YMCA are paying off. 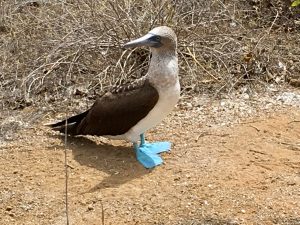 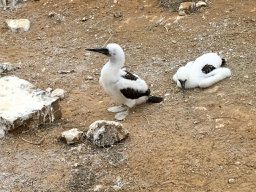 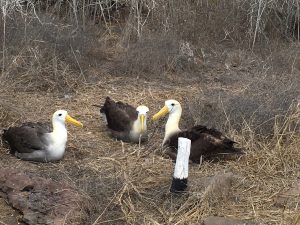 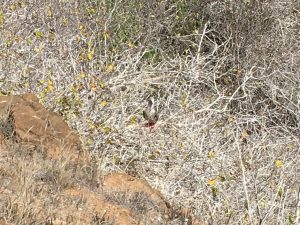 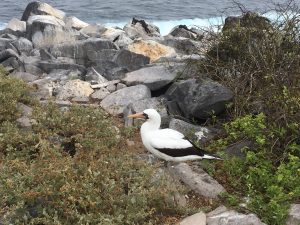 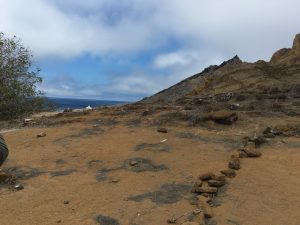 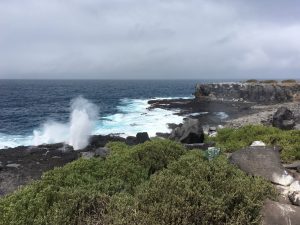 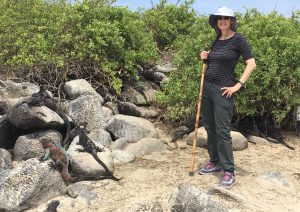 We rest on a beach where two sea lions play in the ankle-deep water right in front of us.  Some go snorkeling and I try but even in a wetsuit the water is too cold for me and I don’t feel comfortable enough to head out with some others along the shore where a zodiac boat follows them for safety.  We are always required to wear life jackets when we ride in the rubber “panga” raft, with which I am happy to comply. 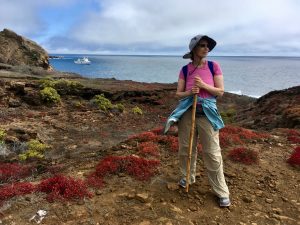 On one trip, we are in a glass bottom boat in a lagoon where a group of four teenage sea-lions decide to entertain us, swimming under us so we can see their graceful moves, and then frolicking together and seeing who can jump the highest out of the water right next to our small boat.  They don’t stop until we finally, regretfully, pull away to head back to the ship.

Our last afternoon, one group kayaks along the shore while four of us walk along another spectacular beach, watching the ever-present sea lions, the iguanas, and examine the skeleton of a small whale on the sand.  We see some sea turtles as well in the water.  We sit quietly on some driftwood, mesmerized by the peaceful beauty of this part of the island. 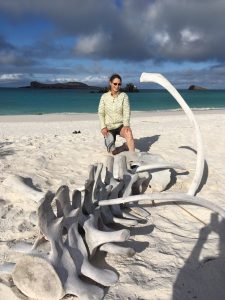 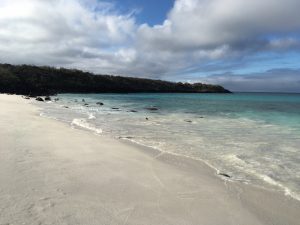 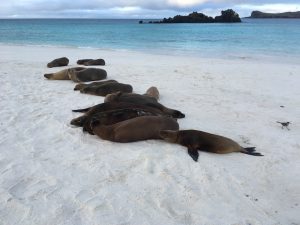 On the way to the airport on Baltra, off of Santa Cruz Island, we visit another known location of the giant tortoise, located in a misty, rainy area, our first actual showers on this journey.  We wear rubber boots and come away splattered with mud but viewing some very happy land tortoises. 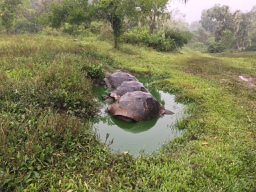 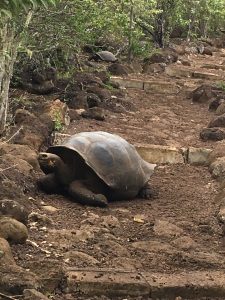 I am very grateful to Adventure Associates, the Tren Crucero, and Southland Touring for providing me the opportunity to explore Ecuador as I have done in the past few weeks.  I knew little about the country and now am enamored by the diversity of geography that Ecuador offers, the genuine warmth and hospitality shown by everyone I have met, and the beautiful hotels everywhere I have been.  I am now looking forward to visiting other countries in South America — maybe some of you will join me on July 2, 2019, for a total solar eclipse at a beach resort in La Serena, Chile.  There are always new adventures awaiting. 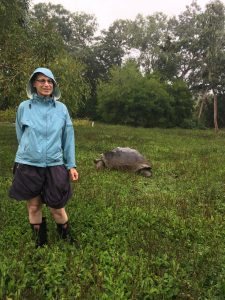